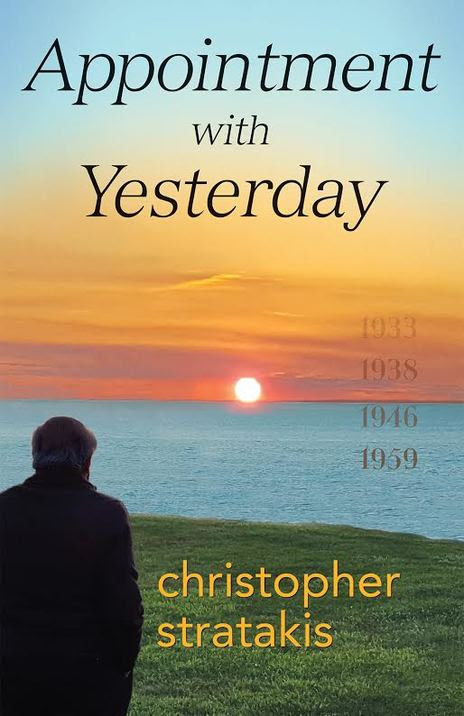 Tour dates: Oct 2 to 20, 2017
Content Rating: PG-13 + M (There is no bad language or violence, but there are references to sex and sexual situations (including between a pre-teen and teen)

A poignant and compelling first novel, Appointment with Yesterday tells the story of Yanni, a cheeky and delightful Greek boy growing up in a small town on an island in the eastern Aegean.

Left in the care of his loving grandparents, Yanni endures the deprivation and terror of the German occupation during World War II and finally leaves his beloved homeland and family to rejoin the parents who had left him behind to make a better life for themselves in America.

Filled with heartbreaking and heartwarming stories of love, devotion, disenchantment, and dashed dreams, Appointment with Yesterday is, ultimately, the story of hardships overcome and a determined boy’s journey toward finding his destiny.
​
Buy the Book:
Amazon  ~  Barnes & Noble
Book Depository  ~  Books-a-Million
Add to Goodreads

Christopher Stratakis was born and raised in Greece. After moving to America, he graduated from Drexel University in 1951 and New York University School of Law in 1955. Shortly after joining the law firm of Poles, Tublin & Patestides in 1960, he became a partner, specializing in admiralty and corporate law.

He has written and published several articles, lectured on professional and historical subjects, served as Legal Advisor to several non-profits (pro bono), and was an arbitrator in maritime disputes. He is the author of Mnimes “Memories” (2010), a book of essays, short stories, and poems that he wrote as a teenager. In 2015, he co-edited Chains on Parallel Roads, a book published by Panchiaki “Korais” Society of New York. In recognition of his extensive community involvement, he has been the recipient of several awards from religious, governmental, and educational institutions.

Mr. Stratakis lives with his wife in New York City. He is the proud father of three and grandfather of three. This is his first novel.
Posted by Misty103 at 8:31 AM