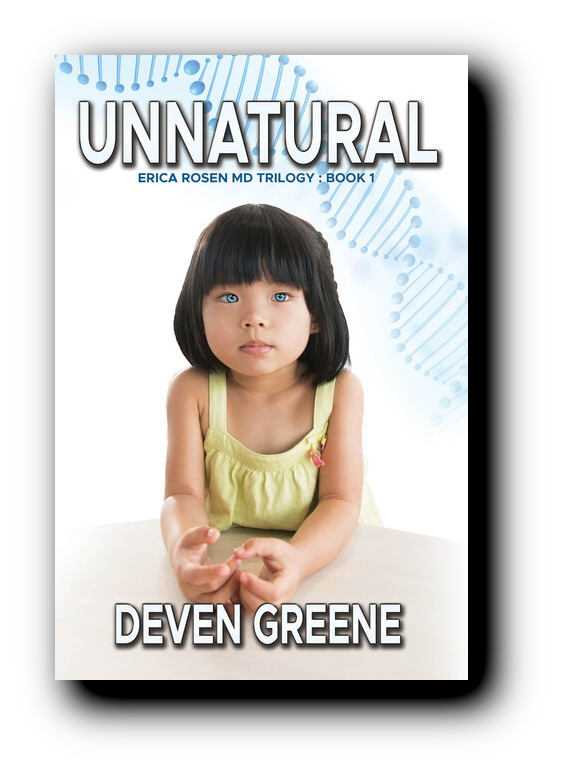 Dr. Erica Rosen is perplexed when she sees a young Chinese girl with blue eyes in her San Francisco pediatrics clinic. The girl’s mother, Ting, is secretive, and Erica suspects she has entered the country illegally. Later, Erica encounters Ting’s son and discovers he has an unusual mutation. Erica learns that Ting’s children underwent embryonic stem cell gene editing as part of a secret Chinese government-run program.

The Chinese government wants to murder Ting’s son to prevent others from learning about his unusual mutation and the secret gene-editing program. At Ting’s urging, Erica heads to China to expose the program and rescue the infant Ting was forced to leave behind, all while attempting to evade the watchful eye of the Chinese government.

A compelling and richly woven story, perfect for those looking for their new favorite thriller!

The UC San Francisco pediatric clinic is a lively and bustling facility where every sort of injury and infirmity has been seen, diagnosed and treated. That is, until the day a Chinese migrant named Ting brings her daughter in for an evaluation. The striking girl is truly an anomaly, bearing genetically impossible bright blue eyes. Dr. Erica Rosen presses Ting for information, but Ting is paranoid, evasive and overly protective of her family’s privacy. Things become more puzzling when Ting ends up in the ER with a wounded young son and insists that someone is trying to kill the boy. Shocking test results, a second attempt on the boy’s life and a missing phlebotomist are just the beginning of a riveting tale of government conspiracy, medical mystery and dangerous close-calls.

Unnatural is a flawlessly written medical thriller that focuses on a Chinese mother who will sacrifice everything to save her children. Erica is a bold protagonist who follows her instincts to some amazing discoveries. The narrative is driven by intelligent dialogue and a clever, yet heinous, plot. The cultural aspects between Ting and Erica feel authentic and the technical medical language is just complicated enough to feel genuine without becoming difficult to read. Deven Greene has created a truly gripping international thriller with just the right amount of humanity and compassion.  Unnatural, the first in the Erica Rosen MD Trilogy, is a compelling and richly woven story, perfect for those looking for a new favorite thriller!

Fiction writer Deven Greene lives in the San Francisco Bay area. Ever since childhood, Deven has been interested in science.  After working as a biochemist, she went back to school and became a pathologist.  When writing fiction, the author usually incorporates elements of medicine or science. Deven has penned several short stories. Unnatural is the first novel the author has published.

My Review
Unnatural was the best medical thriller I have ever read! I love the characters, the plot, and the mystery that the author wove together. I really liked Dr. Erica Rosen and her willingness to put herself in danger to help others.
Posted by Misty103 at 9:30 PM