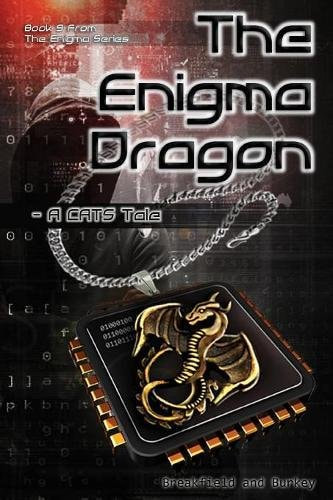 Do the vast amounts of information and technology available hold humans hostage? Does analog communication create a vulnerability?

The political climate in the world is unnerving. North Korea is running missile tests, but where are they getting their deadly supplies? Meanwhile, terrorists are hiding in plain sight, using American technology that is out on display in libraries and museums for the world to see, but are using analog methods to gather and assemble their information. No internet searches equal no red flags which lets the bad guys believe they are operating undetected. But the Cyber Assassin Technology Services (CATS) team is on the job. As Juan and Julie Rodríguez send their operatives out across the globe to track down these foot soldiers also known as Analog Information Mules, they'll discover the horrible potential treats, and learn about each other along the way.

Mike and Marge control ePETRO, an oil shipping business with offices in London and New York, but they don't have the same business goals in mind. Marge intends to sell the North Koreans uranium in addition to oil obtained illegally from the government sanctioned Middle East. But Mike may have other plans, mainly, keeping the profits of these sales for himself. Then there is the mysterious Steven Christopher, who oversees the AIMs, and is working several angles behind the scenes. Steven is the only one trusted by both Marge and Mike, but why?

The CATs team has feet on the ground, with Ernesto and Tyler following two women through Washington, D.C. as they visit the Smithsonian looking for nuclear fusion processes and down the Texas coast where a dangerous package makes its way onto a ship bound for Asia. Jamie, an Irish man with a heartbreaking past, joins the team in Texas and finds not only a new job, but acceptance. George and Summit travel across Asia following the oil and some suspiciously mislabeled furniture. After a rocky start at being paired up, Mercedes and Brayson head to Panama and are watching a previously known Dark Net data center, but Mercedes is soon extracted to help out in D.C. She quickly becomes embroiled in Steven Christopher's world. Brayson is left behind alone in Panama and, still recovering from a lost love, learns that he can't truly be a part of the team until he has forgiven himself.

While Juan stays with Quip and his supercomputer ICABOD, tracking his team members and relaying constantly updated information at the team's nerve center, Julie heads to London. Julie finds herself in the center of all the trouble as she goes undercover in the ePETRO offices. When Julie disappears, Juan drops everything to find her. Quip loops his wife EZ, a Unified Communications expert, to help monitor and control the CATS team movements so that operatives can find the culprits in their different theaters of operation.

Award winning authors, Breakfield and Burkey, take readers on a new techno thriller adventure with their 9th book in The Enigma Series. The Enigma Dragon is chilling journey across four continents, and twelve cities that uncovers terrifying possibilities of what is to become of our world if the CATS team cannot defeat our enemies.
​
Buy the Book:
Amazon ~ Barnes & NobleEBG ~ Kobo ~ Signed copy
Add to Goodreads
​
Watch the book trailer:
​
​Meet the Authors:

Roxanne Burkey
Roxanne has two passions – working with technology and writing. She enjoys working to drive optimized customer experiences with technology in her role with a high-tech manufacturer. Texas is home for her and her family. When time permits Rox likes gardening, hiking, sewing, refinishing antiques, exploring, wine-tasting, and traveling. She loves to listen to people which often results in odd treasures that come to life in her stories. Now included in people on the move in Dallas Business Journal.