The Austin Paradox continues the remarkable saga of Robert James Austin in a gripping emotionally-charged thriller that explores the most compelling issues of our time. 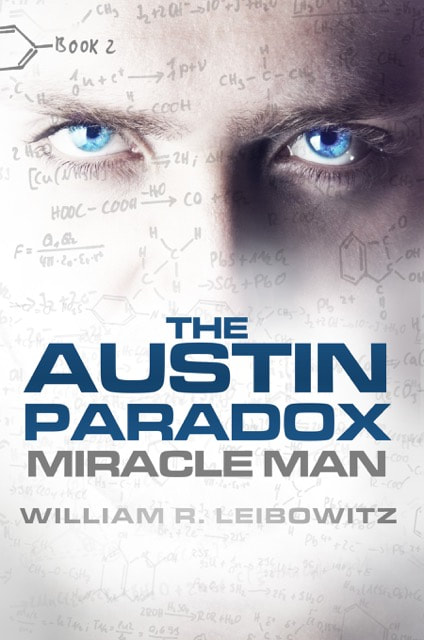 The Austin Paradox continues the remarkable saga of Robert James Austin in a gripping emotionally-charged thriller that explores the most compelling issues of our time.

Having lost his extraordinary intellectual powers in a laboratory explosion that was intended to kill him, Dr. Robert James Austin, the greatest genius in history, whose medical cures saved countless millions, struggles to find meaning in a life that has become devoid of purpose.

As he embarks on a journey of self-discovery in an effort to regain his abilities, Austin battles private demons, otherworldly forces, and a government obsessed with controlling him. When ruthless political and business interests align to pose an existential threat to humanity, Austin is thrust into the maelstrom.

Doubted even by those who love him, Austin is confronted by a harrowing paradox as time runs out to save mankind from extinction.

The Austin Paradox is the sequel to the critically acclaimed, award winning novel, Miracle Man, which was named by Amazon as One of the Top 100 Novels of 2015, a Top 10 Best Selling Thriller and a Top 10 New York Times/Amazon Best Seller.
Buy the book:
Amazon ~ Barnes & Noble ~ iBooks ~ Kobo
Add to Goodreads

William R. Leibowitz practices law internationally and prefers not spending too much time in any one place. He is a graduate of New York University and Columbia University Law School.

My Review
After finishing The Miracle Man by William R. Leibowitz I quickly found myself diving head first into The Austin Paradox by William R. Leibowitz. The Austin Paradox by William R. Leibowitz can be read as a stand alone book,but I would recommend reading The Miracle Man first as it give insight into Dr. Robert James Austin's character. I found myself enjoying this book even more than the first one because the author explored Dr. Robert James Austin without his extraordinary intellectual powers so I got to see more of him as a man instead of just as a genius.
Posted by Misty103 at 12:00 AM