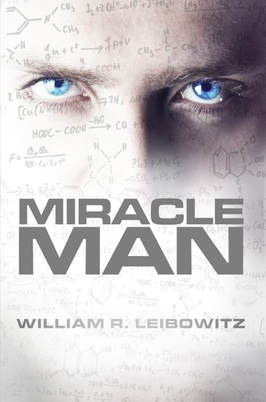 REVERED REVILED REMARKABLE
​The victim of an unspeakable crime, an infant rises to become a new type of superhero. Unlike any that have come before him, he is not a fanciful creation of animators, he is real.

So begins the saga of Robert James Austin, the greatest genius in human history. But where did his extraordinary intelligence come from?

As agents of corporate greed vie with rabid anti-Western radicals to destroy him, an obsessive government leader launches a bizarre covert mission to exploit his intellect. Yet Austin’s greatest fear is not of this world.

Aided by two exceptional women, one of whom will become his unlikely lover, Austin struggles against abandonment and betrayal. But the forces that oppose him are more powerful than even he can understand.

Miracle Man is the winner of a Best Thriller national award, and was named by Amazon as ONE OF THE TOP 100 NOVELS OF 2015, a TOP 10 BEST SELLING THRILLER and a TOP 10 NEW YORK TIMES/AMAZON BEST SELLER
Buy the book:
Amazon ~ Barnes & Noble ~ iBooks ~ Kobo
Add to Goodreads
​

William R. Leibowitz practices law internationally and prefers not spending too much time in any one place. He is a graduate of New York University and Columbia University Law School.

My Review
The Miracle Man by William R. Leibowitz was a well written book that had me interested after my first look at the cover then the synopsis reeled me even more. The book itself lived up to and exceeded both the cover and description. I found myself really liking Austin and wanting to find out how his story would end. When I finished the book I was very happy to already have the sequel on hand. Make sure to look for my review of The Austin Paradox in a few days!
Posted by Misty103 at 12:00 AM