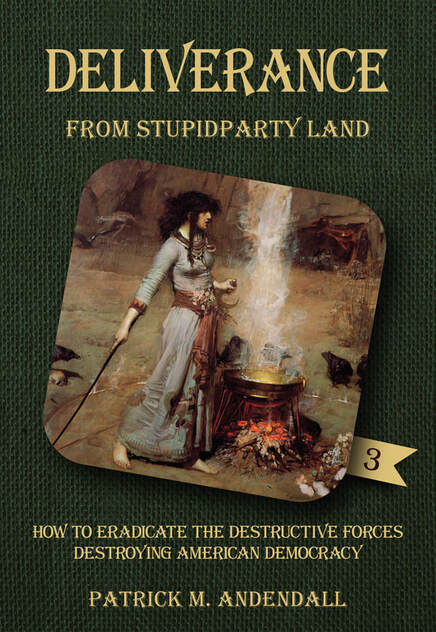 How did the US voluntarily arrive at the doorstep of its own demise? is homemade manmade Handmaid's Tale, where falsehoods and transparently mean-spirited claptrap trump facts and common decency--subverting naïve yet positive innocence into a malignant supremacist and myopic nationalistic agenda that is now in aming the planet's already rising temperature of self-harm? All this to cloak the true aspirations of the identi ed malevolent Oligarchs, who no longer lie quietly waiting.

The first book in this trilogy (Math v. Myth) exposed the blatant myths that now overshadow reality. The second book (Who is Jeb!!!) uncovered the horrible histories of the Bush dynasty--revealing how America, beginning with the JFK assassination, began its descent from being a force for good, to now having zero moral authority. Allies hold us in contempt; enemies nurture us.

We must understand the problem in order to visualize and actualize the solution. Since I fear the solution is unlikely to be enacted organically, we must prepare to seek a ballot-box-inspired intervention from a higher power--we must seek deliverance from our own collective folly, not from the heavens but from our own homegrown saviors, whom we created in the image of own inescapable delusions.
​
Buy the Book:
Amazon
Add to Goodreads
​

Patrick Andendall has always had an interest in politics and, being multicultural, he views issues from a more international perspective. In 2004, five days before the election, he flew to Cleveland and pitched in to help with the political process. What he discovered was the dissolution of the American Dream, which he writes about in his book, Stupidparty.

Educated at English boarding schools from the age of seven, Andendall went on to graduate from Lancing College. He started by sometimes working three jobs at once, trainee Underwriter/claim broker at Lloyd’s of London, his own one man cleaning Company (cleaning the very offices of a Reinsurance Company he would transact business at) plus doing seasonal work on various farms.

Having made some windfall profits by borrowing money in order to be a “Stag” to take advantage of opportunities created by Margaret Thatcher’s de nationalization policies of the mid 1980’s, Andendall evolved into an entrepreneur with a core specialty in Reinsurance in London and New York where he looks for patterns in numbers. Self-employed in a field not normally conducive to self-employment, he is able remain in control, juggle different jobs, travel and pursue his various interests.

Ending up in New York via romance in the African bush, Andendall now lives on Long Island with his wife, two children and two dogs.

Connect with the Author: Website ~ Twitter
My Review
Deliverance from Stupidparty Land by Patrick M. Andendall was a well written book that focuses on improving America through trickle up economics and real Christianity. I personally found myself really latching on to the concept of real Christianity to improve the country as I feel like if enough people were to really embrace it we could all really improve this country! Overall, I found this book to be a worthwhile read and I really hope the concepts actually are used in the future of this country!
Posted by Misty103 at 12:30 AM