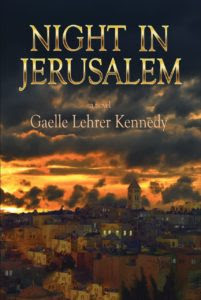 Title: NIGHT IN JERUSALEM
Author: Gaelle Lehrer Kennedy
Publisher: PKZ Inc.
Pages: 246
Genre: Historical Romance
A bewitching love story that is also an extraordinary portrait of Jerusalem, its faith, spirituality, identity, and kaleidoscope of clashing beliefs, Night in Jerusalem is a novel of mystery, beauty, historical insight, and sexual passion.
David Bennett is invited to Jerusalem in 1967 by his cousin who, to the alarm of his aristocratic British family, has embraced Judaism. He introduces David to his mentor, Reb Eli, a revered sage in the orthodox community. Despite his resistance to religious teaching, David becomes enthralled by the rabbi’s wisdom and compassionate presence. When David discloses a sexual problem, Reb Eli unwittingly sets off a chain of events that transforms his life and the life of the mysterious prostitute, Tamar, who, in a reprise of an ancient biblical story, leads both men to an astonishing realization. As passions rise, the Six Day War erupts, reshaping the lives of everyone caught up in it. 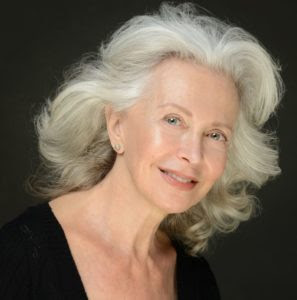 Gaelle Lehrer Kennedy worked as an actress and writer in film and television in the United States and Israel. Night in Jerusalem is her debut novel, which she has adapted to film. She lives in Ojai California with her husband and daughter.
She writes, “I lived in Israel in the 1960s, a naive twenty-year-old, hoping to find myself and my place in the world. The possibility of war was remote to me. I imagined the tensions in the region would somehow be resolved peacefully. Then, the Six Day War erupted and I experienced it firsthand in Jerusalem.
I have drawn Night in Jerusalem from my experiences during that time. The historical events portrayed in the novel are accurate. The characters are based on people I knew in the city. Like me, they were struggling to make sense of their lives, responding to inherited challenges they could not escape that shaped their destiny in ways they and the entire Middle East could not have imagined.
I have always been intrigued by the miraculous. How and where the soul’s journey leads and how it reveals its destiny. How two people who are destined, even under the threat of war and extinction, can find one another.
Israel’s Six Day War is not a fiction; neither was the miracle of its victory. What better time to discover love through intrigue, passion, and the miraculous.
Writing this story was in part reliving my history in Israel, in part a mystical adventure. I am grateful that so many who have read Night In Jerusalem have experienced this as well.”

My Review
Night in Jerusalem was a well written historic romance novel that stayed true to the time period. I personally liked the historical aspects best as I felt the romance felt just a little fake to me. Besides for the fake feeling romance I really did enjoy the novel, the plot, and the characters! David Bennett was a great character especially with how he was so will to embrace his religion in the face of the feelings of his family.
Posted by Misty103 at 1:00 AM