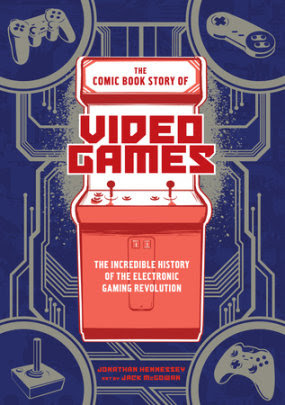 A complete, illustrated history of video games--highlighting the machines, games, and people who have made gaming a worldwide, billion-dollar industry/artform--told in a graphic novel format.

Author Jonathan Hennessey and illustrator Jack McGowan present the first full-color, chronological origin story for this hugely successful, omnipresent artform and business. Hennessey provides readers with everything they need to know about video games--from their early beginnings during World War II to the emergence of arcade games in the 1970s to the rise of Nintendo to today's app-based games like Angry Birds and Pokemon Go. Hennessey and McGowan also analyze the evolution of gaming as an artform and its impact on society. Each chapter features spotlights on major players in the development of games and gaming that contains everything that gamers and non-gamers alike need to understand and appreciate this incredible phenomenon.

The Comic Book Story of Video Games The Incredible History of the Electronic Gaming Revolution by Jonathan Hennessey; artwork by Jack McGowan was an interesting book that I greatly enjoyed as a video game fan. I liked the comic elements of the book as it kept the book interesting and not too dry and boring!
Posted by Misty103 at 12:22 PM