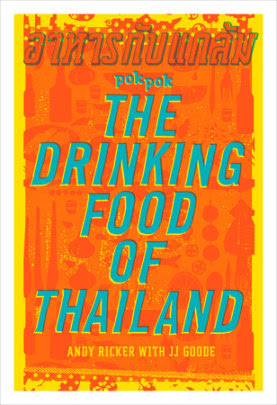 A cookbook featuring 50 recipes for Thai drinking food--an entire subset of Thai cooking that is largely unknown in the United States yet boasts some of most craveable dishes in the Thai canon, inspired by Andy Ricker's decades in Thailand and his beloved restaurant, Whiskey Soda Lounge.

A celebration of the thrill and spirit of Thai drinking food, Andy Ricker's follow-up to Pok Pok brings the same level of authority, with a more laid-back approach. Just as America has salted peanuts, wings, and nachos, Thailand has its own roster of craveable snacks: spicy, salty, and sour, they are perfect accompaniments for a few drinks and the company of good friends. Here, Ricker shares accessible and detailed recipes for his favorites: phat khii mao, a fiery dish known as "Drunkard's stir-fry; kai thawt, Thai-style fried chicken; and thua thawt samun phrai, an addictive combination of fried peanuts with makrut lime leaf, garlic, and chiles. Featuring stories and insights from the Thai cooks who taught Ricker along the way, this book is as fun to read as it is to cook from, and will become a modern classic for any lover of Thai cuisine.

POK POK The Drinking Food of Thailand was an interesting cookbook filled with recipes I had never heard of before that I was interested in trying. The way they were laid out made it easy to find what I was looking for and the instruction were easy to understand!
Posted by Misty103 at 7:57 AM