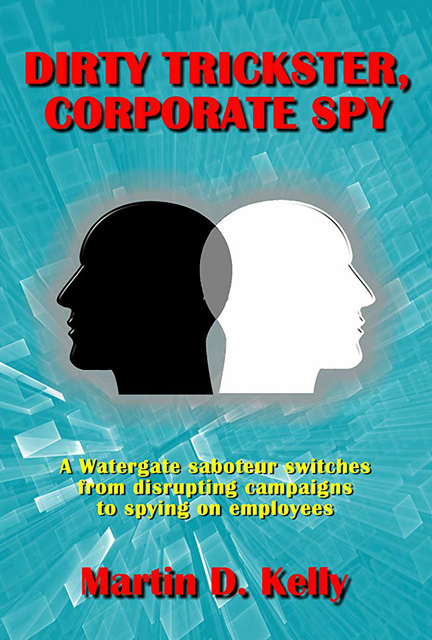 Not until Dirty Trickster, Corporate Spy does a memoir exist by one of the principal Watergate saboteurs-provocateurs that exposes the full extent of the insalubrious side of politics and negative campaigning. And that is not all: After Watergate, Kelly became a corporate security consultant that provided undercover agents for client companies to spy on their employees. Kelly also specialized in eavesdropping detection, which took him around the world searching for clandestine listening devices for clients such as Frank Sinatra, Dean Martin, Bob Hope, Ferdinand Marcos, the Miami Dolphins, Eastern Airlines and even suspected drug dealers. He secretly provided debugging training for entities such as IBM, Revlon, the U.S. Navy and dozens of others.

During President Nixon's second term when the Watergate scandal erupted, Kelly teamed with Donald Segretti in a wild series of underhanded capers that created havoc in the Democratic presidential primaries. Kelly and Segretti turned a fundraising dinner for front-runner Senator Ed Muskie at the Washington Hilton into absolute chaos; hired a University of Miami coed to strip naked and parade before Muskie's hotel; released two mice and a bird that threw a Muskie press conference into total confusion; organized fake luncheons, fake press releases, and other unscrupulous acts. The aim of the Nixon White House and Committee to Reelect the President was for the dirty tricksters to sow discontent among the Democratic primary candidates so they would blame each other for the dirty tricks, making it more difficult for them to unite in the general election against Nixon. The author was one of only three witnesses who testified specifically about dirty tricks before the Senate Watergate Committee.

Initial chapters reveal how dirty tricks were covertly planned and executed, how Kelly dealt with special prosecutors, investigators, Karl Rove, Watergate Judge John Sirica, the FBI, an inebriated Senator Ted Kennedy, the seven U.S. Senators on the Senate Watergate Committee, Bernstein and Woodward, Lesley Stahl and others in the media. Mid chapters expose inside secrets on successful tactics for public-office seekers or those climbing the rough-and-tumble steps of internal party politics.

In final chapters, Kelly unveils the widespread corporate spying that is going on in America to this day, with amazing examples from his security consulting career as a covert industrial undercover agent and secret mystery shopper who spied on all levels of employees. Kelly also fully discloses his role as a polygraph examiner and interrogator with hilarious anecdotes as well as how polygraph can be beaten. Even more controversial examples are revealed from Kelly's specialized international work as a detector of clandestine listening devices, complete with the tools and tricks of the trade.

With an intriguing yet amusing style, Kelly names names and holds back nothing in Dirty Trickster, Corporate Spy. 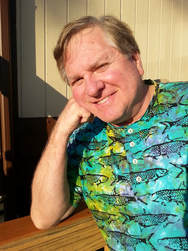 Martin D. "Doug" Kelly is a successful author and freelance writer who resides in Clearwater, Florida. A rising Republican activist in college, his role in Watergate dashed any political ambitions. He thereafter engaged in a security-consulting career that included spying on the workforces of corporate America, during which time he also become renowned internationally as a locator of clandestine listening devices. When not fishing and playing golf, Kelly contributes travel- and outdoors-related articles for a variety of publications and co-hosts a weekly syndicated radio talk show. ​

Connect with Martin:  Twitter
My Review
Dirty Trickster, Corporate Spy by Martin D. Kelly was the very first memoir that I have actually enjoyed reading! I loved reading about Kelly's involvement with Dean Martin, the Miami Dolphins, and Eastern Airlines as it really opened my eyes to what can go on behind the scenes. I found some of the ricks rather amusing and I found it rather sad how often people fell for them. Overall, this was a great book that was worth the read.
Posted by Misty103 at 12:30 AM