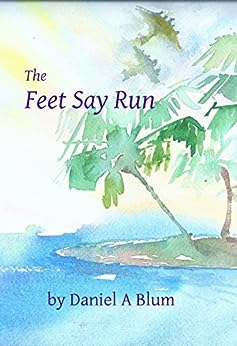 The Feet Say Run is the story of a life spent running—a literary novel that is also a suspenseful page-turner, a work at once emotionally gripping and darkly comic.

In his waning years, Hans Jaeger finds himself stranded on a desert island—the last island not mapped by modern GPS — with a small band of survivors. What is my particular crime? he asks. Why have I been chosen for this fate?
And so he begns the chronicle of his long life. He tells the tale of his life in Nazi Germany, the Jewish girl he loved, and his years fighting with the Wehrmacht. His war experiences are vividly individual—a struggle for survival in the most harrowing of circumstances—and yet also the broader story of the cruelty and absurdity of the Nazi regime, the madness of men, and of war itself. Hans’s story is the story of all the madness, irony and horror of the modern world—and the story of one man who finds redemption only when there’s nowhere left to run.

More about the author

Dan Blum grew up in Roslyn, Long Island, went to Brandeis University, and now resides outside Boston. He is the author of "Lisa33", published by Viking in 2003, and, "The Feet Say Run," published by Gabriel's Horn Press in 2016.
He also writes a widely read humor blog, "The Rotting Post," and has published shorter essays in Publisher's Weekly, Poets and Writers Magazine, and elsewhere.

My Review
The Feet Say Run is a book that pulls the reader in slowly with two different possibilities about the main character. I personally found the book rather confusing at first as I thought the book was going to be about one thing and it was actually about another. This is a story about a man who only really begins to face himself and who he is after he no longer has anywhere to run. The author made good use of figurative language and did a spectacular job in creating a plot line, setting, and main character that all flowed together nicely. I do wish that the book was a bit easier to understand from the start.