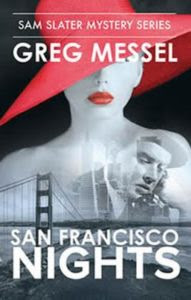 Author: Greg MesselPublisher: Sunbreaks PublishingPages: 232Genre: Mystery / Suspense
The wife of a wealthy San Francisco shipping magnate leads a secret life but someone is threatening to expose her.  Private eye Sam Slater and his wife and partner, Amelia, meet a mysterious woman in a large red hat during a train trip. The woman approaches him pleading for help because she‘s receiving anonymous notes quoting Bible verses which are becoming more and more ominous with each passing day. Her secrets have been discovered but by whom? What really happens behind closed doors in Room 505 in a swanky downtown hotel?
Sam is willing to take the case but Amelia warns that this woman is nothing but trouble. What does the woman really want? She’s been watching Sam for months and has a scheme to pull him into her world.
Find out in the latest Sam Slater Mystery “San Francisco Nights” set in the fall of 1959. It’s the seventh book in the series but is a heart pounding stand alone whodunit.
Watch the book trailer at YouTube.

ORDER YOUR COPY AT AMAZON 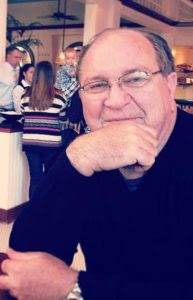 Greg Messel has spent most of his adult life interested in writing, including a career in the newspaper business. He won a Wyoming Press Association Award as a columnist and has contributed articles to various magazines. Greg lives in Edmonds, Washington on Puget Sound with his wife Jean DeFond.
Greg has written ten novels. His latest is “San Francisco Nights” which is the seventh in a series of mysteries set in 1959 San Francisco. “Shadows In The Fog,” “Fog City Strangler,” “San Francisco Secrets,” “Deadly Plunge” are sequels to the first book in the series “Last of the Seals.” His other three novels are “Sunbreaks,” “Expiation” and “The Illusion of Certainty.” For a more detailed summary of Greg’s novels go to www.gregmessel.com
Greg is currently working on his eleventh novel “Dreams That Never Were” which is not part of the mystery series.

My Review
San Francisco Nights is the 7th book in the series, but I had no problems getting into it without having read the previous books. The only thing I felt like I missed out on was some character development from the previous books. The plot line was well constructed and I liked how I was able to try and solve what was happening alongside Sam.
Posted by Misty103 at 12:00 AM