The Ghost Princess by M. Walsh 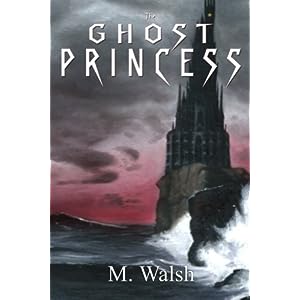 The Ghost Princess by M. Walsh is an interesting novel that takes place in an entirely different reality.  The Ghost Princess by M. Walsh is a book best suited for adults and young adults who enjoy the fantasy genre. Katrina Lamont is a woman who was once considered a chosen one, but is now a resident of the Graylands (a neutral where people who don’t wish to be found reside); she might have once been a great hero, but it left her alcoholic drifter who is forced to hide from the demons of her past. Jacob Daredin is an evil sorcerer who might just make Katrina Lamont draw her sword once more to prevent him from fulfilling an ancient prophecy that would give him the power of a god.


Move over Cirilla Fiona Elen Riannon and Leia Skywalker and make room for a new chosen one, Katrina Lamont. Katrina Lamont is not your typical chosen one who is a young person who is chosen for a great destiny instead she is a drunken women trying to hide from her past in the Graylands. Yet when evil comes she steps up to the plate to face off against Jacob Daredin and his forces to keep the world safe. M. Walsh truly creates a new fantasy world in The Ghost Princess and he has created a new type of chosen one. I found that I enjoyed Katrina Lamont as a character because she is not the a-typical chosen one instead she eventually because a strong woman who can and will do what needs doing to keep the world safe.
Reviewed by Sefina Hawke for Readers' Favorite
Posted by Misty103 at 2:48 PM