Black in White by JC Andrijeski

“My name is Black. Quentin Black…” 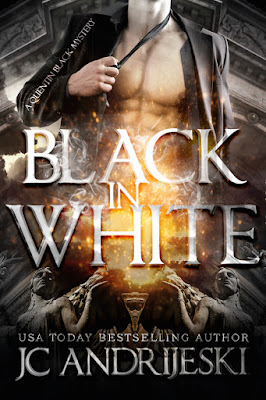 Gifted with an uncanny sense about people, psychologist Miri Fox works as an off and on profiler for the police. So when they think they've finally nailed the "Wedding Killer," she agrees to check him out, using her gift to discover the truth.

But the suspect, Quentin Black, isn't anything like Miri expects. He claims to be hunting the killer too, although for reasons of his own, and the longer Miri talks to him, the more determined she becomes to uncover his secrets.

When he confronts her about the nature of her peculiar "insight,” Miri gets pulled into Black's bizarre world and embroiled in a game of cat and mouse with a deadly killer––who still might be Black himself. Worse, she finds herself irresistibly drawn to Black, a complication she doesn’t need with a best friend who’s a homicide cop and her boyfriend in intelligence. Can Miriam see a way out or is her future covered in Black?

Praise for JC Andrijeski’s Writing
“Andrijeski delivers a whopper of an action flick...” ~ New Myths
“The sexual tension is scorching...” ~ The Muses Circle
“Amazing characters in an out-of-this-world scenario...” ~ The Indie Bookshelf
“The most impressive display of world-building I have seen in a while.” ~ I (Heart) Reading

Like Sherlock Holmes? Meet the sexy, psychic version, Quentin Black, and his partner in crime, forensic psychologist Miri Fox. Picked up as a suspect in the Wedding Murders, Black faces off with Miri, who works for the cops. She learns he’s searching for the murderer too, but with his own agenda.

JC Andrijeski is a USA Today bestselling author who writes sexy, apocalyptic and cyberpunk-y science fiction romance and mystery books, often with a metaphysical bent. Current works include the gritty, epic, psychic warfare romance, ALLIE'S WAR, which follows Allie Taylor and her antihero partner, Revik, in their attempts to save the world from a dark, psychic force. Her dystopian science fiction romance series, ALIEN APOCALYPSE, features Jet Tetsuo, survivor and slave under alien conquerors, and her GATE SHIFTER series is about a shape-shifting alien and a tough-girl PI from Seattle. Her newest launch is QUENTIN BLACK, a paranormal romance and mystery series set in our own version of Earth. 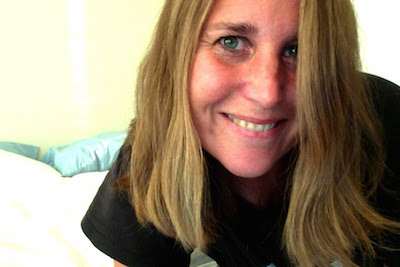 JC has a background in journalism, history and politics, travels extensively and has lived abroad in Europe, Australia and Asia, and from coast to coast in the continental United States. She currently lives in Bangkok, Thailand.

To learn more about JC and her writing, please visit jcandrijeski.com.

If you want to get an automatic email when JC's next book is released, join THE REBEL ARMY at tinyurl.com/JCAndrijeski.

Psychologist Miri Fox has an uncanny sense about people. When police think they've nailed the "Wedding Killer," she agrees to check the guy out, but the suspect, Quentin R. Black, isn't at all what she expects. When he confronts Miri about the nature of her peculiar "insight,” she is drawn into Black's bizarre world and a game of cat and mouse with a deadly killer, who just might be Black himself.

Pretty much since I was old enough to talk. I told stories to my brother and sister before I figured out how to write them down, but I wrote my first stories when I was maybe 7-8 years old. I actually still have a copy of my first “novel,” a story called “Thunder Mountain” about dogs who get free of their owners and form a rebel army in the woods. So yeah, come to think of it, my writing hasn’t changed much, in terms of the dominant themes.

Yes, I do. I work out of Bangkok, Thailand right now. I’ve got kind of a fascination with Asia, and it’s cheaper to live here, so it’s given me a bit of financial cushion which makes it easier to write full time.

It’s a little more mainstream, honestly. It’s also a bit more grounded in “ordinary” Earth, even though it’s paranormal and there are a lot of fantastical elements still. It’s a spinoff of sorts of my Allie’s War series, and while that’s a series I really love to write, it involves a highly-complex world which can be difficult for people to get into. I’m hoping this series will take some of the more interesting elements of that but in a more familiar-seeming world and with faster-paced books.

I’m also a huge fan of mystery and crime books and especially of the rogue detective types who live by their own moral code. Quentin Black is very much that type of hero. He’s also incredibly damaged in a lot of ways. In some ways, he’s even more damaged than Revik, the hero from the Allie’s War books.

4.       Describe your main character?
Well, that’s the big question, isn’t it? Just who is Quentin Black? The narrator of the book, Miri Fox, spends a good portion of the book trying to figure that out. She’s a psychologist who meets him after her best friend, a homicide detective, brings her in to interview and profile him when they pick him up as a murder suspect.

Suffice it to say, he’s a man with a lot of secrets…and a lot of money, which is sort of surprising given what he does with his free time. Miri goes back and forth trying to decide how much to trust him throughout the book, but she is undeniably drawn to him, too.

5.       Who would you choose to play that character in the movie version?

Ha, good question! I haven’t really thought about this, but off the top of my head, Rupert Friend would do an amazing job, I think. He’s not quite as “buffed” as Quentin Black is described, but he has the look and the intensity otherwise. Jai Courtney would be amazing too.

Off the top of my head, I’d have to say Stephen King. He’s just a master at emotion and moods, and how to really pull you into the story on the level of character. There are so many authors I love though, that’s a really difficult question.

God, I have no idea. I’d probably be tongue-tied or start blathering at him like an idiot.

Honestly, for me, it would be to remember why you write. Focus on the writing itself, the stories you want to tell, the people you want to reach, the things you have to say. I think there’s such a focus now on running after audiences. It’s sell-sell-sell and what’s the new hot thing and the new hot writer and personally I find all of that really cynical and kind of tired after awhile. I recognize that there’s probably (a lot) less money in my approach, but I honestly am not sure there’s more happiness in the other one…so I guess it comes down to what matters to you. At the end of the day, I want to be happy, and that means enjoying what I do every day, even if it means less money. I recognize that for others, that meter might be different, but I would suggest to all just-starting-out writers to figure that out BEFORE you start chasing things out of fear or peer pressure or whatever else. Be your own person…write your own way…and ignore it when people give you a hard time about that.

I’m still in such awe that anyone wants to read my books, lol. Every fan letter, every note, every comment…it all still really touches me. Writing books really is a conversation. If no one’s listening, it feels half-finished. So to everyone who finishes my books by reading them, I have nothing but profound gratitude.

Well, I have a lot of words to write, that’s for sure. I plan to publish three more books in the Quentin Black series by January or so, then I have the final book in the Allie’s War series to write. My 2016 is pretty full of words too, ha.

11.   If you could live anywhere, where would that be?

I’m pretty happy here in Bangkok, actually. I’m extremely lucky in that I’m highly mobile right now, so I’ve considered trying out a few more places in the next few years, but for now, I’m quite content where I am. Thailand is a beautiful country.

12.   If you could choose a super power, what would that be?

Haha! I love this question! I think I’m going to have to go with flying. I would loooove to be able to fly. I think it would be terrifying but incredibly exhilarating. That, or if I could touch people and instantly make them happy. That would be pretty cool. I think the world would be much more laid back place if a few thousand––or even a few hundred––of us could do that.

I’m a writer, opinionist, traveler...and someone who is deeply interested in the human condition in all of its forms, both light and dark. I’m also a hopeless romantic. As a result of some combination of those things, I tend to write a lot of apocalyptic and metaphysical types of stories...with superpowers, sex, angst, heroism, redemption, defeat. Hope. My characters are always fighting the dark in one way or another, whether in the world or in their own minds.

As far as me, my educational background is in politics and history and my pre-writing work was primarily in business, but I’ve also spent a fair bit of time meditating in caves, traveling, doing yoga and studying martial arts. I’ve worked as a freelance journalist, a photographer, a printer, a project manager, a business consultant, a teacher, a stable hand, a caregiver, and a waitress. I’m hesitant to name a final resting place at this point, but I travel pretty extensively and have lived abroad in Europe, Australia and Asia, and from coast to coast in the continental United States, but currently I write full time and live in Bangkok, Thailand.

For invitations to review advanced copies of books, exclusive content and giveaways, first notice of new releases and other updates, join my mailing list, THE REBEL ARMY. Your email will be kept private, you will never be spammed and you can unsubscribe at any time.

Get in touch with me either via my website or Facebook or send me an email at: jc.andrijeski@yahoo.com - thanks again so much for joining me in my make-believe worlds!