The Summer Marked (The Winter People #2) 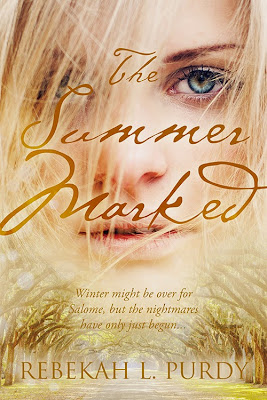 Salome left humankind behind to be with her boyfriend, Gareth, in the Kingdom of Summer. But now forces of darkness are rising. Her happily-ever-after is coming apart, and the Kingdom is on the brink of war.

Newly-single Kadie Byers is on her way home for Thanksgiving, imagining a visit filled with hot chocolate, a hot guy for a little rebound action, and some girl time with her bestie, Salome. Except she receives a message from Salome with two important words: PLEASE HURRY.

When Kadie rushes to help Salome, she’s ripped from the human world and pulled into the kingdoms of Faerie, where she's shocked to learn that Salome's monsters are real, and that she's now at the mercy of one extremely vengeful Winter Queen...

Now both Salome and Kadie must find a way to survive the deadly chaos...or lose themselves to Winter's deadly, icy grasp. 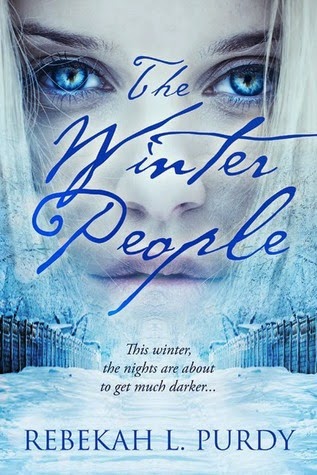 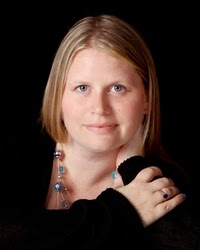 About the Author
Rebekah Purdy grew up in Michigan, where she spent many late nights armed with a good book and a flashlight. When not hiding at her computer and getting lost in her stories, she enjoys reading, singing, soccer, swimming, football, camping, playing video games and hanging out with her kids. She loves the unexplainable like Bigfoot, the Dogman, and the Loch Ness Monster (lots of good story material)! She admits to still having all the books she bought throughout her childhood and teen years, and she may or may not have an obsession with anything chocolate...

Gareth kicked himself back onto his feet. The silver of his blade glinted as he swung it once more. This time the weapon connected with the backs of the troll’s legs, severing the tendons. The troll yelped in pain and collapsed into the  ferns. “Turn your head,” Gareth told me. My throat thickened, and I buried my face against the horse’s side. Two more loud howls erupted, then all went silent. “It’s okay, he’s dead now.” I pulled away from Adaba and stared in horror at the giant head lying in the leaves, its lifeless eyes still glowed even in death. Thick black blood dripped from the foliage. I covered my mouth as nausea overtook me. Gareth wiped his sword off and hurried to my side. He clutched me tight to his chest. “Shh...just close your eyes and count to ten.” “I feel sick.”  “I know. Just don’t look at the body, okay? I need you to stay right next to Adaba while I scout out the woods.” “Wait—you’re leaving me alone?” My voice quivered. I so didn’t want to be left with the severed body. Hell to the flipping no. “Only for a moment.” He disappeared into the undergrowth, not giving me the chance to argue. Several minutes passed before he reappeared, breathless. “Are you all right?” I caught his arm. His skin was slick with sweat. “Get on your horse.” “What?” “Salome, you have to go.” I swallowed the rock-like lump in my throat. “By myself?” “Yes—this troll was only a scout. The others aren’t too far out.” No. This isn’t happening. “Others? But you’ll be killed. I-I can’t leave you.” Gareth turned to Adaba. “Take her to the Ruined Court and hide. If I’m not there in two days’ time, get her to Summer.” Adaba whinnied and shook his mane as if he understood. Gareth sheathed his sword and picked me up, his arms tightening around me. His lips crushed mine with urgency, as if he was taking his last breath. And I clung to him, absorbing his heat and his woodsy scent. When he pulled back, he set me
atop my mount. “Gareth, please...” Tears streamed down my cheeks. I reached for him, as if that’d really keep him from going anywhere.  He slid a dagger from beneath his tunic and slipped it into the belt of my gown. “Don’t be afraid to use this.” “Please.” “I love you, Salome.” He swatted Adaba’s flank, and the horse carried me into the woods. As we rode away, I heard the distinct sound of heavy footsteps tromping through the brambles.  I jerked on Adaba’s reins. “Turn back. We can’t leave him.” But the horse ignored my feeble attempts and galloped deeper into the forest. A sob raked through me as I realized that I might never see Gareth alive again.

“Close the door and stay in there until someone comes to get you,” the fairy said. “We need you safe.” I slammed the door shut, then leaned my head against my arms. Pitch blackness surrounded me. A thick, musty scent clung to the damp air. Chains rattled at the back of the room. I went still. Tap. Tap. Tap. Something shuffled behind me. Whispers began in a low buzz, echoing off the walls. I clutched my dagger tight to my chest and slid to the floor. My stomach knotted. My heart raced. Any minute now, I’m gonna pee my pants. A sudden burst of light illuminated the room, and I squealed. “Don’t worry, we’ll protect you...” a voice hissed like air leaking from a tire. A ghostly fi gure fl oated toward me. Its translucent skin glowed; its eyes were hollow and black. Phantom arrows protruded from its—or rather his—heart. He raised a finger and pointed. “Get away from the door.” I climbed to my feet but stood where I was. The fairy had screwed me over. She’d led me to be murdered by flipping ghosts. “NOW!” I staggered forward right as something rammed into the door. The wood splintered while growls erupted on the other side of the barrier. My eyes darted about the room. There was nowhere to go. Well, other than a creepy ass hallway at the back of the room. Pop. Other ghosts appeared and shoved tables, barrels, stones—anything they could find—in front of the door. A cold touch on my arm made me scream as the same ghoulish man-ghost ushered me toward the serpentine hall I’d seen just a few minutes ago.

No way. I don’t want to go in there. Yet, I didn’t have a choice. If I stayed out here, who knew what the dog from hell might do to me? Okay, so I either got mauled to death or accosted by a phantom. Ghost it is. My body quivered as I finally followed after the being. Bluish orbs lit the narrow passageway. Cobwebs brushed against my face. I prayed they didn’t have spiders attached to them. Shadows clung to the rock walls, seeping out to trail us. Deeper we went, until at last, we came to a metal door. Carved into its base were the same suns, snowflakes, flowers, and leaves I’d seen on the stones outside. The door creaked open, and I stepped into a room filled only with a large stone table and several chairs carved right into the rock walls. Please don’t let that be a sacrificial altar. I stood silent for a moment in an effort to catch my breath. When I turned, I saw an army of ghosts step through the walls and ceiling. “Who are you? An-and what do you want?” “We are the ruined...” the ghostly man said. “We’ve come for you...” My knees buckled, and I reached for the wall to steady myself.
Posted by Misty103 at 9:13 AM